From the  mid 1980s through last  year Bill White spent most mornings at Calder Race Course, running his  stable and building a record as one of the leading trainers in Florida’s racing history..

That includes being leading  trainer  in  wins at eight straight Calder race meets from 1997 through 2004.

White is taking a break  from training this year as he  focuses  on his new duties as president  of the Florida  Horsemen’s Benevolent and Protective Association,

But he still spends  several mornings each week on the backsides at Calder and at Gulfstream Park. He walks the barn areas, visiting trainers to get their thoughts and suggestions on issues that are impacting   the Florida thoroughbred industry in 2015.

It is a year filled with controversy on the political and regulatory fronts.. It also is a year when White expects that the Florida  HBPA, Gulfstream and  the Florida Thoroughbred Breeders’ and  Owners’ Association will expand  their alliance on many issues.

White has career totals of 2,031 wins and $34,839,761 in earnings. Those numbers are on hold at least until next March 31  That’s  when White plans to return to training after he finishes  what he says will be just one 12-month  term as president of the Florida HBPA.

Since the 1990s White had several stints as a director  of  the Florida HBPA.  But he did not seek the presidency until this year.

“I always felt that  I could help make a difference for our  industry,” he  said. “But I also knew  that running a stable with 40 horses is  a full-time job.  If I tried  to do both (Florida HBPA and training) it would not have been fair to the FHBPA or to my horses, their owners and  my staff.”

White opened his window to the Florida HPBA early this year, He dispersed his stable to other trainers and  began a long-planned break from  training. He soon decided to run for  president if the Florida  HBPA.

The Florida HBPA has a  membership of  about 6,000 owners and trainers who do business in Florida–some year-round and others for the  winter months, .

Combest remains a member of  the Florida HBPA board and  of its executive committee with the new title of vice president-legislative affairs. That is an example of how White is delegating duties and responsibilities among Florida HBPA directors and other members amid what he calls “unprecedented challenges.”

“The debate is no longer over issues  like race dates and  the number of races per day,” he said. “It is about issues like what we  are seeing in  Tallahassee and that threaten our industry and its survival.”

On a  positive note White said: “There are exciting opportunities with Gulfstream.  This is the first year that Gulfstream has been able to plan for year-round racing without the potential of  a conflict with Calder.”

A central issue for the Florida horsemen and their allies is their  opposition to the goal of Calder, Florida’s greyhound tracks and harness track Isle Racing & Casino at Pompano Park to “decouple” live races from other gaming.

In each of the last three years, the Florida Legislature considered but did not approve bills that would end the greyhound tracks requirement to hold live racing while continuing to let  them bring in simulcasts (including  thoroughbred races in Florida and other states).and have poker rooms,

Late in this year’s  legislative session Calder also made that request.  All have cited  declines in wagering on  their live events. Under de-coupling, Calder would also be  able  to  keep  its casino with Las Vegas-style slot machines–and  so would other pari-mutuels in Miami-Dade and Broward  counties.

The legislature will begin its 2016 session on Jan. 12.  Committee  hearings will begin this fall and  decoupling will again be part of the discussion on  gaming issues.

In meetings with legislators and at hearings, White has explained and will continue to explain why the Florida HBPA opposes decoupling for any pari-mutuels.

White points out that Greyhound and other pari-mutuel licenses are for live events and those licenses have enabled them to be eligible for poker rooms and incoming simulcasts. If they cut their operating costs by not holding  live events they would have an advantage in  their competition with thoroughbred tracks for poker and  simulcast customers

“Calder in effect has already decoupled.” White said  at a hearing of the House Finance and Tax Committee on April 22.

Under an  agreement they signed last summer, Gulfstream has leased Calder’s racing operations through the end  of    2020.

There are  now only two months of racing each year at Calder,, in October and November wiih Gulfstream using the name Gulfstream Park West. Calder is in Miami Gardens, eight miles west of Gulfstream in Hallandale Beach.

On July 1, 2014 the Florida Division of Pari-Mutuel Wagering approved an agreement that Gulfstream and its parent The Stronach Group reached with Calder and its parent Churchill Downs Inc. to immediately end the head-to-head weekend  racing.that  they began  in July 2013.

The deal includes the Gulfstream lease of Calder’s racing operations.  CDI remains the owner of Calder and continues to operate its casino.

“CDI has  gotten  out of the game (racing) in Florida,  but they still have an ownership interest and that makes it worrisome about what they might  do next,” White said.

During April, Calder tore down all of the barns that were on a section of its backstretch that it has designated for a non-racing commercial redevelopment  Calder and CDI have not yet announced any plans for  that development.

White as a Trainer

He has been leading trainer based on wins at 11 Calder meets and at five Tropical at Calder meets held at  the Miami Gardens track.

That places him second to  his legendary and semi-retired friend Manny Tortora, who has more than 2,000 Calder wins.  A precise number for Tortora is not readily available because of discrepancies between Calder data and Equibase Co. data.

White is originally from the Chicago area, His grandfather Lawrence Adolfie, a thoroughbred owner in Southern Illinois, was the source of his love for horse racing.

White moved to Largo, Fla., in 1968. After earning his Masters Degree in Special Education from the University of South Florida, he taught in Sarasota public schools for six years while coaching baseball at Booker High School. To supplement his teaching salary, White shod horses on the weekends at Tampa Bay Downs during the 1970s

He obtained a trainer’s license  in  1983.  He spent the three years after that at Tampa Bay in the winter, and then training at Finger Lakes, River Downs and Atlantic City in the summer.  In 1986, he began training full-time in South Florida.

White and his wife, Laura, have been married since 1976. They have two grownchildren, Lindsey and Jake. 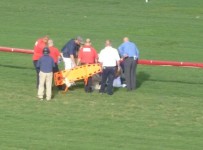