There  were no tickets with all six winners on  the Rainbow 6 bet on Saturday at Gulfstream Park.

So, the Rainbow 6 payout was divided  among the multiple tickets that had winners in five races.   It was $4,148.26  per ticket.

Gulfstream will have ten races with first post time   of 1:00 p.m.  The card  has no stakes races.

The Rainbow 6 will be on the  fifth through tenth races  Scheduled post time for the fifth is  3:00 p.m..

Only one of yesterdays Rainbow 6 races was won by the  betting favorite  That was  a main reason there were no  tickets  with six  winners.

A large number of  tickets were eliminated when 18-1 shot Good  and Proper  won  the ninth race.

Good and Proper won the 1 1/16  mile turf race, the day’s feature with a $40,000 purse, by a half length over Concert Stage.  The 3-year-old gelding is trained by Larry Bates and was ridden by Edgard  Zayas.

The race had eleven  starters,  typical  of the large fields in turf races that are part of  the Rainbow 6 and  of Gulfstream  field sizes  in general  during the summer meet that began July 1.

For the current meet, Gulfstream and the Florida Horsemen’s Benevolent and  Protective Association are combining to pay $250 to  each trainer in a race where eight or more horses leave the walking  ring for the track.

From this Thursday through Saturday, Gulfstream reached that  eight-horse level in  24  of 28  races. The average number of starters per race was 8.75.

Reviews of Equibase charts indicate that average  was in  the 8.0  to  8.2  range  during most weeks  in Gulfstream’s spring meet.

And  while there is  no  formal  evidence, indications  are that the  starter incentives are helping  Gulfstream’s field  sizes  cause.

Gulfstream pays out the full Rainbow 6 pool  (day’s bets plus carryover) only on days when  there is just one ticket with all six winners.

On days when  there are tickets with six  winners  there are no “five of six” consolation payouts.

The Rainbow 6 is a 20 cents-only per combination  bet.  A ticket can have multiple horses in each race, and thus  multiple combinations.

Saturday was  the sixth straight day on  which there were multiple winners on the Rainbow 6.

For the day, bettors at Gulfstream and around  the country wagered $81,522  on the Rainbow 6.

The six  races have 73 entrants, including horses that are Main Track Only and Also Eligible.

The tenth race presents  the kind of  handicapping challenge  that is typical for a  last race at Gulfstream.

Southern Stroll (2), Wildcat Kitten (7)  and Trapnall Hall (11) are the  likely favorites–based  on some recent results that indicate  they are  on the upswing.

Wildcat  Kitten finished third in  a  $16,000 claiming race at one mile on Gulfstream’s turf  on June 24.   Zayas will ride the son of Kitten’s Joy  for trainer Gary Jackson.

Harry Hernandez has the return mount for trainer David Fawkes.

Southern Stroll  and Wildcat Kitten likely will be in he second flight of horses.

Past performances indicate that T Minus (10)could  challenge Trapnall  Hall for the early lead, And there  is a prospect that T Minus  will benefit from  a drop  n class.

T  Minus has  raced  seven times  on  the Gulfstream  turf this  year, finishing  no  better than fourth.  But all except  one of those races were  at claiming  levels higher than today’s $12,500 level.

Cases can  be  made for several other  horses in  today’s  nightcap. But a case also can be  made to”get out a blindfold  and a pin.” 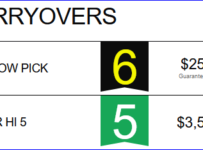