Monday, July 13 — Spring has turned to summer at Gulfstream Park and the trainer-owner team of Stan Gold and Jacks or Better Farm is picking up where it left off.

They led their respective categories in purses won  during Gulfstream’s spring meet that ran from April 8 through June 30.

Through yesterday, the eighth day of the summer meet, Gold and Jacks  or Better are both first in wins and in purses at Gulfstream.

They have combined  for five victories and for $270,195 in earnings.

Jacks or Better is in Ocala and is owned and  operated by Fred and Jane Brei who established in 1997.

Their numbers for wins and earnings are identical because since 2006   Gold has trained exclusively for Jacks or Better,  which uses him as its sole trainer at Gulfstream and at Calder Casino & Race Course.

This October and November, Gulfstream will again hold 40 days of racing at Calder using the name Gulfstream Park West.

Two of the Gold-Jacks or Better summer meet winners were in stakes races on the Summit of  Speed card on Sunday July 5.

Gold and Brei sent out two  other winners this past Saturday.

.The early July results indicate that the Gold-Brei team could be headed for a very big summer meet at Gulfstream, especially in the expanded Florida Sire  Stakes Series.

They have sent out a record 16 winners in that series of races for 2-year-olds–through 2013 at Calder and last year at Gulfstream.

This year at Gulfstream, the sponsoring Florida Thoroughbred Breeders’ and Owners’ Association and Gulfstream have added six Sire Stakes races for 3-year-olds.

Gold and Jacks or Better swept the 2-year-old male division with Jackson Bend in 2009 and with Fort Loudon in 2011.

They swept the 2-year-old fillies division with Awesome Feather un 2010. She went on to win that year’s Breeders’ Cup Juvenile Fillies Stakes (Grade  1) at Churchill Downs and Eclipse Award as champion juvenile filly.

This year, Gold and Brei will have one or more strong contenders in all four Sire Stakes divisions.

That list includes their 3-year-old colts Sing Praises and Twotwentyfive A, neither of which ran on Summit day, and several of their horses that ran in Summit races.

Almost all of Jacks or Better’s runners are homebreds.  Many are sons or daughters of the Jacks or Better stallions Awesome of Course and Hear No Evil.

Gold and Jacks or Better combined for 13 wins and $449,020 in purses at this year’s Gulfstream spring meet.

That placed Jacks or Better first in owner earnings and second in victories behind Frank Carl Callabrese who had 21.

While Gold was first in purse money, the 13 wins put him in a tie for sixth place.

Gold’s topping the money list was attributable largely to a series of third place or better finishes in stakes races.

After eight  days of the summer meet, five trainers are tied for second place with three victories. They are Gustavo  Delgado, Luis Duco, Bill Kaplan,  Ralph  Nicks and Wesley Ward.

Three jockeys are  tied  for the lead with eight wins.  They are Eddie Castro, Edgar  Prado and Edgard  Zayas. 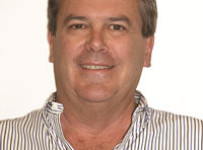 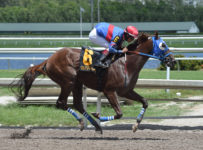