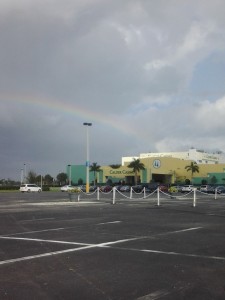 “They (Calder) have told us that they plan to  start tearing down their building right after the  end of our Gulfstream Park West meet,”  Gulfstream Park general manager P.J. Campo said in a recent interview about Gulfstream’s 2015 racing meets.

Campo added that Calder has told  Gulfstream that  it will not  open the grandstand building to the public during the  40-day Gulfstream Park West meet,  from Oct. 7 through Nov. 28.  Gulfstream, which is running the meet but does not control the Calder building, will set up tents where fans can bet and be protected from rain and other elements.

Officials of Calder and of its parent Churchill Downs Inc. (CDI) of  Louisville,  Ky., did not respond to an e-mail and did not return phone calls between last Thursday  and  yesterday.

In several articles we did for the Bloodhorse Web site, CDI director of investor relations Courtney Norris said the company has a policy of declining to  comment on  requests for details about its plans  at Calder because of Securities and Exchange Commission rules that prohibit release of forward-looking information.

CDI  trades on the Nasdaq under the symbol CHDN. It is scheduled to release its second quarter results at 4:30  p/m  Eastern  tomorrow.

This fall’s meet at Calder will be the second in  which Gulfstream  is using the Gulfstream Park West (GP West) name under terms of a lease  agreement  the two tracks and their parent companies signed last  summer.

That deal ended the tracks’ bitter  racing dates dispute that culminated in  head-to-head weekend racing between July 2013 and June 2014.

Several South Florida  horsemen said they had heard talk about a Calder plan  to tear  down its building.  Thus, they were not surprised by the information from Campo.

Basically  CDI is  getting out of racing at Calder and  no longer needs the  building that it opened in 1971, the same year it opened its track.

Campo  added that  during the  GP West  meet the building’s sixth and seventh floors will be open  for the stewards, placing  judges, Equibase chart callers  and personnel  of companies that time and film races.

During last fall’s GP West meet Calder kept the first floor of its  building open for wagering and had a refreshment stand inside.

This fall, Gulfstream  will put up  several  tents  outside the Calder building, Campo  said.  The tents  will have mutuel clerks,  betting machines and refreshments,   The several  hundred seats  between the building and the track will  remain in place.

Gulfstream  is holding its summer meet, from July  1 through  Oct. 3. at its track in  Hallandale Beach. Fla.  Calder is in Miami Gardens, Fla., eight miles west of Gulfstream.

Calder has not had racing under  its name since June 30,  2014.  That  also was the last day its grandstand building was open  to the public, for simulcasting or any other reason, except for the GP West meet last October and November.

Until 2012,  Calder traditionally had racing from  mid April until late November each year.

If Calder tears down its grandstand, it would follow the work it did in  April when  it tore down barns that had about 1,400 stalls in an area of its backside that it has designated for a non-racing commercial re-development.

Calder and CDI have not released  any details of their plans for re-development.

There have been reports that Calder is  considering  its former backside as a site for a transportation logistics center for trucks that  travel between airports in  Florida or as  the site for a hotel.

As of  late April, Calder had not obtained any of the necessary permits from  government agencies for construction or for tear-down work.

Officials  of the City of Miami  Gardens did not respond to phone messages and  an e-mail on  Friday or yesterday.

There are  reports that Calder’s building has asbestos, and  would thus require a traditional demolition rather than an implosion.

The building is connected by a covered walkway to  the casino that Calder opened in January 2010.

Since then, many trainers and owners have complained about deteriorating conditions in  the building and  the barns at Calder.  Some maintained that Calder gave the casino a  huge priority  in terms of spending on repairs  and renovations.

On  many  days,  horsemen and race  fans had to deal with broken elevators and broken escalators.

David Fawkes. Marty Wolfson  and Eddie Plesa Jr.   are among prominent trainers who have mentioned those types of problems.

Amid ongoing declines in its handle  Calder early this decade closed the building’s  third and fourth floors,  which in prior  years were crowded with fans on  many weekend days,  In 2013 Calder closed its Turf Club on  the fifth floor.

In  the agreement signed last summer, Gulfstream and its parent The Stronach Group  of Aurora, Ont.,

leased  Calder’s racing operations through the  end  of 2020.  Gulfstream pays all costs and receives all  revenues in running the GP  West meets.

For CDI to keep that casino,  Calder  must have at least 40 race days per year.  A key factor In getting CDI to accept last year’s deal  was getting the Florida Division of  Pari-Mutuel Wagon’s approval for the dates leased by Gulfstream  to be used  by CDI in meeting its requirement for the casino.

In  each of the last three years, the  legislature considered but did not pass bills that would have  permitted  greyhound tracks to stop having live racing while keeping their poker  and simulcasting business. That  includes bringing in Thoroughbred signals,

If Calder is decoupled, it would be allowed to keep its casino.  Calder is in Miami-Dade, which along with Broward are the only Florida counties in which  casinos  are permitted at pari-mutuels.

The Florida Horsemen’s Benevolent  and Protective Association and the Florida Thoroughbred Breeders’ and Owners’  Association are concerned about  whether Calder.  if allowed to decouple, might attempt to alter some terms of its 2014 agreement–which has restored some stability and continuity in South Florida racing.

NOTE:  The photo  on  the home page with this story is from  bloodhorse.com and  was taken by South Florida racing photographer Leslie Martin. The inset-photo is by HorseRacingFLA photographer.