As of 10:30 a.m., conditions are fast and firm and there are no scratches in the Betsy Ross.

Katie’s Kiss is among likely favorites in a nine-horse field for the Betsy Ross.

Following an encouraging third-place finish against older horses in the Tiger Lily Handicap at Gulfstream on June 6, Stonestreet Stables’ Katie’s Kiss is set to face her own age group in the Betsy Ross.

The David Fawkes-trained 3-year-old filly earned a career-best Beyer Speed Figure of 80 for her performance in the Tiger Lily, a five-furlong turf sprint on June 6. After settling in mid-pack early, the sophomore daughter of Kantharos closed steadily along the inside to secure the show. The only horses to beat her were Grade 2 winner R Free Roll and stakes winner Fascinante.

“Against older fillies, it was a spot that she really shouldn’t have been in, but she really ran a big race,” Fawkes told the Gulfstream press office.

“I think she came out of the race better than she went into it,” Fawkes said. “She looks stronger, she’s training better. Her color is fabulous. I’m really happy with her.”

Saturday’s 7 ½-furlong Betsy Ross will present a new challenge for Katie’s Kiss, as it will be the first time the filly will run beyond six furlongs on either dirt or turf, but Fawkes believes the extra ground will not present a problem.

“I don’t think that will bother her a lot, because she just falls out of the gate,” Fawkes said. “[Jockey Tyler Gaffalione] knows her. He’s won on her already. If you just break, you sit, and she’ll be fine. I think she’ll get the distance.”

Katie’s Kiss will face eight competitors in the Betsy Ross, including Westminister Road, winner of the Miss Patti Handicap on June 13.
Also entered are Susie Bee and Afleet Mary, the Miss Patti’s third and fourth-place finishers; Urtheoneeyelove, who has contested graded stakes in each of her last three starts; and multiple-stakes winning Holywell, who will make her turf debut in the Betsy Ross. The field is rounded out by recent maiden winner Princess Fiona, L. A. Style and Nevelee.

Summit of Speed
Flutterby, the emphatic winner of the Sea Lily Handicap on May 30, turned in a sharp three-furlong blowout Friday morning in preparation for a start in Sunday’s $250,000 Princess Rooney (G2), the co-featured event on the $1.175 million Summit of Speed program at Gulfstream Park.

The 4-year-old filly, under the tutelage of trainer Jerry Bozzo, breezed the three-eighths distance in 35.53 seconds, the third fastest of 28 workers. Bozzo will send the daughter of Congrats out on Sunday looking to make history. Should she win the Princess Rooney, she would make Bozzo, 94, the oldest trainer to win a graded stakes race.

Rated at 4-1 on the morning line, Flutterby is the Princess Rooney’s third choice behind graded-stakes winners Merry Meadow and R Free Roll. She will break from post five under regular rider Luca Panici.

The Princess Rooney is the 10th race onGulfstream’s 12-race, 9-stake card Sunday. Along with the Smile Sprint (G2), the race is a designated ‘Win &You’re In’ contest for October’s Breeders’ Cup World Championships in Lexington. Sunday’s first race post time is set for 12:30 p.m. 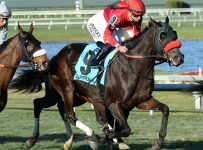