Eight races will be run each day, according to Tampa Bay Downs officials. About half of those races will be on turf, they added. First post time is 12:25 p.m. each day.

By holding the two summer race days, the track is meeting a state regulatory requirement for its simulcasting business.

Since 2013, Tampa Bay Downs has held racing each June 30 and July 1 to comply with the Florida Division of Pari-Mutuel Wagering’s requirements for being a year-round host track for Florida-wide simulcasting of races held at thoroughbred tracks in other states.

Tampa Bay is eligible for that lucrative business if it has racing on the first and last days of a fiscal year with a regular meet of 40 or more days in between. Tampa Bay’s traditional early December through early May meets have between 85 and 90 race days.

A list of possible entrants for the June 30 and July 1 races is not yet readily available.

Tampa Bay Downs officials expect that some horses will be sent over from Gulfstream Park even though that track also is running on June 30 and July 1.

Since early May, some owners and trainers have transferred horses across the state from Tampa Bay to Gulfstream in Hallandale Beach.

It is anticipated that some of those trainers will van horses back to Tampa Bay for two days.

The majority of entrants probably will be sent down from farms in or near Ocala, where they are receiving so-called “freshenings” after racing at Tampa Bay this year.
Rosemary Homeister Jr., perennially among the leaders in Tampa Bay’s jockey standings, is prominent among jockeys who will ride at Tampa Bay on June 30 and July 1.

Homeister, who leads active female jockeys with 2,763 wins, is based this summer at Arlington Park near Chicago.

Arlington Park does not have racing on Tuesdays and Wednesdays. Thus, it is convenient for Homeister to fly back down to her winter home track for the two days,

Many other U.S. tracks that are running this summer do not have racing on Tuesdays and/or on Wednesdays. Thus some other regular Tampa Bay riders will be able to return for two days without missing race days at their summer tracks.

That list includes Hugo Sanchez, currently tied for third at Canterbury Park in Minnesota with 13 winners.

Host Tracks
In Florida a thoroughbred host track, either Tampa Bay or Gulfstream, pays fees to tracks in other states to bring in their signals.

The host track then sells those signals to other pari-mutuels in Florida–known as guest tracks for this purpose.

A state law requires that the guest track receive at least one-third of pari-mutuel takeout on bets made at its site on those races. The remainder of the takeout on those races is divided evenly between the host track and the horsemen’s association with which it has a purse contract.

A Blood-Horse review of Florida DPMW data indicates that the year-round host track business generates about $10 million in annual revenue combined for Tampa Bay Downs and for the Tampa Bay Horsemen’s Benevolent and Protective Association.

The host track business also is providing the impetus for two days of summer racing that are quickly becoming part of the tradition at Tampa Bay Downs. 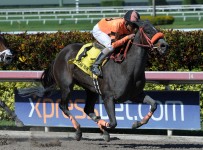