By Jim Freer
Tuesday, June 23 — When Gulfstream Park resumes racing on Wednesday it will have a carryover of $280,176 in its Rainbow 6 pool.

The six-race sequence will be a handicapping challenge.  Meanwhile. excitement will already be building about a possible multi-million payout this coming Sunday.

Gulfstream has not yet made an official announcement. But it has been learned that on Sunday June 28 the track will have a mandatory full payout of the Rainbow 6 pool (day’s bets plus carryover).

On most days, including this Wednesday through Saturday, Gulfstream pays out the full pool only if there is just one ticket with all six winners.

If there are multiple winning tickets, holders of those tickets divide 70 percent of the day’s pool. The remaining 30 percent is added to the carryover.

The Rainbow 6 is on each day’s last six races.

It is a 20 cent-only bet–i.e. 20 cents per combination.
A ticket can have multiple horses in each race, for multiple combinations.

For example, a ticket with two horses in each race has 64 combinations and costs $12.80.

The carryover has been growing because the Rainbow 6 has gone 20 straight racing days with multiple winning tickets.

Now, with a large carryover and the prospect of huge payouts, bettors (at Gulfstream, at simulcast sites and at computers) can be expected to pour $100,000 or more into the Rainbow 6 each day from Wednesday through Saturday.

If there is no single winner any of those days, the carryover probably will be $1 million or more heading into Sunday–when bettors would put several million more into the Rainbow 6.

Consider what happened this past April 25, a Saturday, when Gulfstream had its most recent large carryover heading into a mandatory Rainbow 6 payout day.

If there had been just one winning ticket, the individual or group holding it would have taken down the full jackpot.

No doubt, many bettors who played the Rainbow 6 also made numerous bets on other Gulfstream races.

That’s why Gulfstream will be promoting the anticipated mandatory payout through ads on racing Web sites. Without explicitly saying so, Gulfstream management is no doubt hoping that the carryover will extend into Sunday.

Gulfstream will end its spring meet on Tuesday June 30.

State rules do not allow Gulfstream to take a Rainbow 6 carryover into its summer meet that will begin on July 1.

Gulfstream, not surprisingly, is using a weekend day rather than a Tuesday, for a mandatory payout. It will have a one-day Rainbow 6 pool on June 30.

This week in the Rainbow 6 large daily pools will feed the carryover, because realize that there large payoffs even when there are multiple winning tickets.

Even if the Rainbow 6 is “taken down” on one of the days between Wednesday and Saturday, Gulfstream would still have a mandatory payout on Sunday. In that case, wagering might still be in the $1 million range.

Going into the ninth race, the last leg of the Rainbow 6, there were only three live tickets left.

All were on different horses, that the ticket holders had singled out.

But none of those horses finished better than fourth.

Good and Proper won at 5-1 odds, He was ridden by Jesus Rios and is trained by Larry Bates

Because there were no tickets with all six winners the approximately 60 tickets with five victorious horses became Rainbow 6 winners.

Gulfstream does not have consolation payoffs on the Rainbow 6, even on days when there are tickets with six winners.

Here are the winning horses for Sunday’s Rainbow 6 races, with program numbers and odds.

Hand Picked was the only betting favorite among the six winners.

Wednesday’s Rainbow 6 will be on the third through eighth races. Scheduled post is 2:00 p.m. for the third race.

The sequence will have five claiming races and one $48,000 maiden special weight race for 2-year-old fillies. The six races have 58 entrants, including Also Eligibles.

We will have reports on the Rainbow 6 on this Website and on Twitter
This will include race analysis from ourselves and from handicappers. 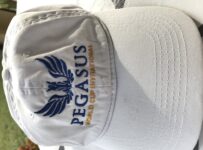 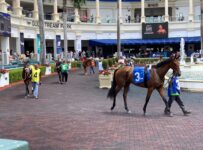