By HorseracingFLA Staff
The Belmont Stakes is just three hours away and two of the day’s three stakes at Gulfstream are still to be run.

We will be monitoring and writing about both tracks and our focus will include the chances of the five Belmont entrants that ran at Gulfstream this year.

Those horses are Materiality (pictured above) Frosted, Keen Ice, Madefromlucky and Frammento.

Materiality and Frosted are widely regarded as having the best chances to derail American Pharoah’s bid for the Triple Crown.

Prior to  6 p.m.we will post our picks for the Belmont Stakes.

At Gulfstream, Grande Shores won the Parrot Key at 6 ½ furlongs on dirt. 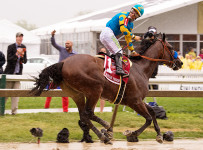 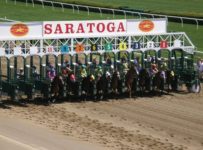 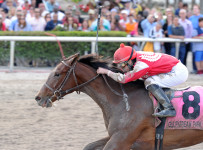