By Jim Freer
At Gulfstream Park this winter the average field size grew 13.1 percent from 8.4 to 9.5 horses while average daily all-sources handle slipped 1.7 percent but was still an impressive $8.1 million.

Those numbers are for the race meet from Dec. 6, 2014 to April 5, 2015 and are a combination of a Gulfstream news release May 4 and Blood-Horse’s follow-up review of Equibase Co. data.

Gulfstream field sizes jumped year-to-year largely because 2013-14 was the one season of head-to-head weekend racing between Gulfstream and its South Florida neighbor Calder Casino & Race Course. Gulfstream had the South Florida market to itself in 2014-15.

Blood-Horse research indicates Gulfstream’s average field size was highest among major U.S. tracks during the past winter and that its average daily all-sources handle was second to Santa Anita Park.

Gulfstream’s record for daily average all-sources handle was $8.6 million in 2012-13.

It is highly possible that Gulfstream would have broken that record in each of its last two winter meets if not for the Calder competition and the lack of handle from tracks in the MidAtlantic Cooperative.

* From July 1, 2013 through June 30, 2014 Calder in Miami Gardens, Fla., and Gulfstream raced head-to-head Fridays through Sundays. Calder averaged about $1 million per day in handle during several of those months. Competition from Calder had an undetermined impact on field sizes at Gulfstream.

* From the start of its 2014-15 meet through late March Gulfstream’s simulcast signal was among those not available to the 23 tracks and their related wagering outlets that are members of the MidAtlantic Cooperative, a group that negotiates simulcast host fees.

Gulfstream is among about a dozen signals distributed by Monarch Content Management, a subsidiary of The Stronach Group which is Gulfstream’s parent company.

Gulfstream is not commenting on that now-resolved dispute. But one point of reference is that Tampa Bay officials said in February that it was costing them about $350,000 a day in handle. That indicates that the impact on Gulfstream may have been $700,000 a day or more.

Meet was a huge success,” P.J. Campo, general manager of Gulfstream, said in the May 4 news release.

“Not only was total handle up but the Florida Derby continues to grow into one of Florida’s biggest weekend events,” added Campo, who also is vice president of racing for Stronach Group. “Of course, none of this would be possible without our great fans and our partnership with the horsemen.”

Gulfstream established new standards for Florida Derby day and the March 28-29 weekend. Total handle on Florida Derby Day was $27.2 million, up from $26.8 million the previous year, while the total two-day weekend handle of $37.2 million exceeded the previous record set last year of $36 million.

A new standard was also established in the new building, which opened in 2006, with a record on-track Florida Derby Day handle of $3.3 million.

Campo said he’s pleased with the increases in total handle and field size during the first month of the six-month summer meet and is looking forward to what he expects will be Gulfstream’s most successful summer meet with a $4.7 million stakes schedule.

“There’s so much more happening at Gulfstream this summer than ever before,” Campo said. “We are looking forward to reestablishing the $1 million Summit of Speed with two Breeders’ Cup Challenge Win & You’re In races in the Princess Rooney (gr. I) and Smile Sprint (gr. II).

The Summit of Speed with sprint stakes was one of Calder’s major days, but was not held in 2014.

Campo added: “We’ve also established a $900,000 Sire Stakes series for 3-year-olds to go along with the $2 million Sire Stakes for juveniles. This is exactly why we signed our agreement with Churchill Downs (Calder’s parent) last year to run year-round and operate Gulfstream Park West. We want to build Florida racing.”

Under the lease Gulfstream is holding 40 days of racing each year at Calder, and is using the name Gulfstream Park West for those race meets. This year’s meet will be from Oct. 7 to Nov. 29. 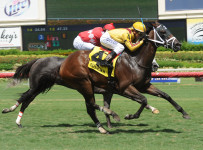