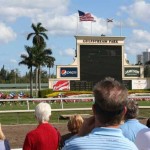 Wednesday, March 25 — Upstart and Itsaknockout, coming off a controversial one-two finish and disqualification in the recent Fountain of Youth, will head a nine-horse field for Saturday’s $1 million Florida Derby.

Gulfstream Park drew post positions Tuesday evening for the 1 1/8 mile Grade 1 stakes for 3-year-olds. The track’s line maker Jay Stone made Upstart the 8-5 favorite and Itsaknockout the 2-1 second choice in the morning line.

Upstart crossed the finish line first, by 2 ¾ lengths, over Itsaknockout in the 1 1/16 mile Fountain of Youth (Grade 2) on Feb. 21 at Gulfstream. But the stewards in an inquiry and amid a rider’s objection declared Itsaknockout the winner and put Upstart in second place for what they determined was interference in two incidents in the stretch run.

Materiality (7-2), the recent winner of the 1 1/8 mile Islamora Handicap at Gulfstream, and Ami’s Flatter (8-1) who finished second in the 1 1/16 mile Tampa Bay Derby (Grade 2) are the only other entrants listed lower than 10-1 for the Florida Derby.

Upstart on Outside
Upstart will be in the nine post–the farthest outside. That is often a disadvantage in 1 1/8 mile dirt races at Gulfstream where the beginning of the first turn is only about 100 yards from the starting gate. That means a jockey and horse must get a fast start or run the risk of a wide trip or getting caught in early traffic.

“It’s a little longer run to the first turn,” Violette said. “You just have to deal with it. That’s what the jock’s up there for. You hope he breaks clean and gets a clear run. You don’t have horses pressing him from the outside, but I’d like to have been inside, even one post inside.”

Stone said the post positions were not a factor in setting the Florida Derby morning line–a guide for bettors on what he expects the post time odds will be. Itsaknockout drew post four.

Upstart has good tactical speed, and Stone expects that jockey Jose Ortiz will get the horse off to a good break and might only be about three wide going into the first turn.

There also is a short run to the turn in 1 1/16 mile dirt races at Gulfstream. Upstart was in the eight post in the Fountain of Youth and in the seven post for the Holy Bull (Grade 2) on Jan. 24. He had clean breaks from the gate and trouble-free trips both times.

Past Performances
Upstart finished third last Nov. 1 in the Breeders’ Cup Juvenile (Grade 1) at Santa Anita. He began his 2014 campaign with a win in the 1 1/16 mile Holy Bull.

Itsaknockout’s win by DQ in the Fountain of Youth gave him a three-for-three career record. His regular rider Luis Saez will be on board Saturday for trainer Todd Pletcher and owner Starlight Partners.

Materiality has won both of his career starts. He is trained by Pletcher and owned by Alto Racing. John Velazquez will ride him for the third straight time.

Upstart won the Holy Bull in a solid 1:43.61 and appeared like he could continue strong at least through 1 1/8 miles. His Brisnet figure was 105.

On Fountain of Youth day, overall times were relatively slow and several trainers said the track was deep. Upstart finished in1:46.28 for a 95 Brisnet figure.

Past performances indicate that longshots Jack Tripp and Indiananaughty could battle Materiality for the early lead. Upstart and Itsaknockout likely will be in a second flight, with Ami’s Flatter near the back and looking to make a late run under Gulfstream’s meet-leading rider Javier Castellano.

On to Kentucky?
The Florida Derby is the first of seven final-round races in qualifying for the Kentucky Derby (Grade 1) at Churchill Downs in Louisville, Ky., on May 2.

The first four Florida Derby finishers will earn 100, 40, 20 and 10 qualifying points, respectively. The winner and runner up points will be enough to make the 20-horse Kentucky Derby field.

Latest standings show Itsaknockout in eighth place with 50 points (all from the Fountain of Youth) and Upstart ninth with 36. Ami’s Flatter is 14th with 20 points. None of the other Florida derby entrants have any Kentucky Derby points.

This week, Steve Haskin of Blood-Horse has Upstart fourth and Itsaknockout eighth on his widely followed Derby Dozen list. Materiality is listed high among those “knocking on the door.”

Carpe Diem, winner of the Tampa Bay Derby, is third on Haskin’s list. He is among Pletcher trainees who have spent the winter at Palm Beach Downs in Delray Beach.

The Florida Derby will be the 14th and last race on Saturday’s Gulfstream card. The scheduled post time is 6:48 p.m.

Post time for the first race is 12:00 p.m. Gulfstream will have eight other stakes races.