* It will be at Calder, the Miami Gardens track that this fall also is known as “Gulfstream Park West.”

* There will be seven stakes races, all restricted to Florida-breds and all with $100,000 purses. Basically, the event is the successor to Calder’s former Florida Million.

* Wildcat Red and East Hall, two standout 3-year-olds stabled at Gulfstream Park, head the field for the feature Sunshine Millions Classic Preview.
The day is the biggest yet in the new Gulfstream Park West meet that Gulfstream is holding under a lease agreement with Calder.

The Classic Preview is 1 1/16 miles on dirt for Florida-breds that are 3-year-olds and up. The field has eight entrants, including Tryer who is entered and more likely to run in the day’s Turf Preview.

It is the eighth race with scheduled post time of 3:58 p.m.

But it appears that any of the other entrants would have to return to top form or run the race of a lifetime to beat both the speedy colt Wildcat Red and the late-running gelding East Hall.

The son of D’Wildcat won the seven furlong Hutcheson (Grade 3), the 1 1/16 mile Fountain of Youth (Grade 2) and the 1 1/16 mile Quality Road. He also finished second by a neck to Constitution in the 1 1/8 mile Florida Derby (Grade I) and second by a head to General a Rod in the Gulfstream Park Derby.

In his first race after the Florida Derby, Wildcat Red finished 18th in the Kentucky Derby (Grade 1) after being bumped heavily after the start.

Wildcat Red raced outside Florida this summer and fall. He finished third in the Haskell Invitational (Grade 1) at Monmouth Park and in the Oklahoma Derby (Grade 3) at Remington Park and fifth in the King’s Bishop (Grade 1) at Saratoga.

Wildcat Red finished ahead of East Hall all four times they raced at Gulfstream between January and June. On June 28 East Hall finished second by 10 ½ lengths to Wildcat Red in the Quality Road.

But the son of Graeme Hall later made a big breakthrough racing outside Florida. He won the ungraded $300,000 Ohio Derby at Thistledown, and on Oct.4 won the Indiana Derby (Grade 2) at Indiana Downs. Those two tracks have generally been less favoring than Gulfstream is to horses with early speed.

East Hall has begun showing an ability to rate off the oace and not be forced to make up as much distance in the stretch, said his trainer Bill Kaplan.

In the Indiana Derby, he raced second most of the way to Vicar’s in Trouble. He caught that rival in deep stretch and won by one length.

“Our horse has gotten better since the last time we ran against Wildcat Red,” Kaplan said. “This will be his (Wildcat Red’s) first race at Calder. We’ll see if things have changed.”

Trainer Jose Garoffalo said he does not expect that Wildcat Red will have any problems with the Calder track.

“I was going to give him a break until next year,” Garoffalo said.
“But he is acting like he wants to run, so we decided to go for this race.”

A key question in the Classic Preview will be whether Wildcat Red and jockey Edgar Prado can control the pace or whether it will be a speed duel that would set the race up for East Hall and rider Luis Saez.

Megamove, Sr. Quisqueyano and Schivarelli all have
early speed and are in posts one through three respectively.

Prado will ride Wildcat Red for the first time

Saez rode East Hall for the first time in the Indiana Derby,

Juan Leyva, East Hall’s jockey in previous races, stayed in South Florida that day to ride for Kaplan in stakes races at Gulfstream.

“He (Saez) asked to ride East Hall again,” Kaplan said. “When a jockey wins a Grade 2 for you and says he wants the moumt again, you don’t say ’no.’”

Leyva, who is Kaplan’s go-to jockey, has mounts for Kaplan in three other Gulfstream Park West stakes today.

Schivarelli, a 3-year-old racing in South Florida for the first time, could be the biggest treat to Wildcat Red and East Hall.

After winning his first two starts at Aqueduct last winter, Schivarelli finished fourth in the Wood Memorial (Grade 1) at that track in April. He returned from a six-month layoff to win a seven-furlong allowance at Keeneland on Oct. 12. Paco Lopez will ride Schivarelli for trainer Eddie Kenneally.

Each Preview day race‘s $100.000 purse includes $25,000 from the sponsoring Florida Thoroughbred Breeders’ and Owners’ Association.
The Classic and the Preview day’s Distaff (fillies and mares 3-years-old and up) and the Turf (3-year-olds and up) are preps for richer races next Jan.17 when Gulfstream will hold its annual Florida Sunshine Millions. 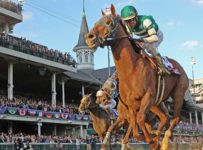