Home
Gulfstream
The trainer-owner teams of Fred Brei-Stanley Gold and Gilbert Campbell-Kathleen O’Connell were almost  dominant the past several years in stakes for 2-year-olds at Calder Casino & Race Course.
On Saturday, they continued that success as South Florida’s 2-year-old stakes shifted to Gulfstream Park.
Sing Praises, from the Brei-Gold barn, won the $75,000 Birdonthewire Stakes for males.  Coco’s Wildcat, from the Campbell-O’Connell, won the $75,000 Cassidy Stakes for fillies.  Both races were 5  1/2  furlongs on dirt.
Tweet Pin It 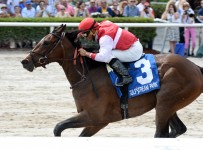