Early this week, trainer Bill Kaplan was planning that East Hall’s next race would be the Bluegrass Stakes (Grade 1) at Keeneland in Lexington, Ky.,on April 12.

“(Then) when I saw that this race might have a short field, I decided to keep him home and race him here,” Kaplan said following Wednesday’s post position draw for this Saturday’s $1 million Florida Derby (Grade 1).

East Hall drew post five and is among eight entrants for the 1 1/8 mile stakes for 3-year-olds at Gulfstream Park, where Kaplan stables his horses. East Hall, a gelding with a late-running style, has finished third at one mile and fourth at 1 1/16 miles in Gulfstream stakes this year.
Now, Kaplan thinks the son of  Graeme Hall and mare East Long Lake is ready to show that he will get better as the races get longer.
Kaplan’s goal for East Hall in the Florida Derby is the same as it would have been in  the $750,000 Bluegrass Stakes: pass some horses down the stretch to finish  third or better, to earn a big check and some qualifying points for the 1-¼ mile Kentucky Derby on May 3rd.
The Florida Derby and Bluegrass both have 100 Kentucky Derby points for the winner. Second through fourth are worth 40, 20 and 10 points respectively.
East Hall has five points. A third place finish on Saturday would probably be enough to earn one of the 20 spots in the Kentucky Derby field.
East Hall gained his five points on Feb. 22 with an impressive fourth place finish in a 12-horse field in the 1-1/16 mile Fountain of Youth at Gulfstream. East Hall was 72-1 in the Fountain of Youth.
He is 20-1in the morning line for the Florida Derby. He will face a field headed by Wildcat Red and General a Rod, two horses that have beaten him twice this year, and the likely favorite Cairo Prince.

While East Hall will again be a longshot for WPS betting, he likely will be on the bottom of many bettors’ trifecta and superfecta tickets.

One handicapping angle is that if the Florida  Derby is a speed duel, one or more lower odds horses could tire and East Hall could join Cairo Prince in passing them. Stakes newcomer Constitution, General a Rod and Wildcat Red all have early speed.
The Florida Derby will be East Hall’s fifth race this year – all with Kaplan’s go-to jockey Juan Leyva.

On Jan. 1, General a Rod beat Wildcat Red by a head after a thrilling stretch duel in the one mile Gulfstream Park Derby. EastHall finished third by  2-¼ lengths.

East Hall had another third place finish in his next start – the 1-1/16 mile Champali at the Ocala Training Center’s annual race day for Florida-breds.

The Fountain of Youth on Feb. 22 was a classic example of the speed bias at Gulfstream. The race also showed the big disadvantage of being in outside posts in Gulfstream’s 1-1/8 mile dirt races, where it is only about 100 yards from the gate to the start of the first turn.

Wildcat Red and General a Rod again showed their grit and talent. But their principal rival, deep closer Top Billing was in post 11. East Hall drew post 12.
Joel Rosario on Top Billing and Leyva on East Hall were forced to angle in at the start to avoid being caught wide on the turn.   That left them farther behind than usual. Wildcat Red and General a Rod hooked up head-to-head after a quarter mile and stayed that way until the finish – with Wildcat Red winning in the photo.
Top Billing and East Hall were last and next to last with a half mile left to run. The more accomplished Top Billing moved first and wound up third by two lengths. East Hall had to weave through traffic and finished four lengths behind Top Billing.
Kaplan is among those who have noted that while Top Billing was gaining on the leaders in the final furlong he was not putting any extra distance between himself and East Hall.

On March 8, Top Billing cracked a bone in one of his legs while training. He underwent surgery that trainer Shug McGaughey said was successful, and could resume training this summer.

Gulfstream-based trainers often take 3-year-olds that are closers to other tracks for Kentucky Derby preps.
On March 9, Kaplan ran East Hall in the 1 1/16 mile Tampa Bay Derby (Grade 2) at  Tampa  Bay Downs. East Hall apparently did not take to that track that is deeper than Gulfstream. He finished eighth, and amid close traffic of horses he sustained what Kaplan said was a minor foot injury that is now healed.
H. Jack Hendricks and Roger Justice own East Hall. Kaplan is hoping that East Hall will be the third horse he runs in a Kentucky Derby. In the 2007 race at Churchill Downs he sent out Imawildandcrazyguy to a fourth place finish and Storm in May to a 16th place finish.
The horse Kaplan and others affectionately called “the crazy guy” was in 20thand last place after three-quarters of a mile. He staged a huge rally and finished just one-half length behind Curlin, who went on to win that year’s Preakness Stakes and the 2007 and 2008 Eclipse Awards as Horse of the Year.
Kaplan said Imawildandcrazyguy was “a plodder,” whereas East Hall has more speed for a sustained run and “has the cardiovascular to run all day.” East Hall’s sire Graeme Hall and his maternal grandsire Sultry Song each won multiple graded stakes at 1-1/8 miles.
Tweet Pin It 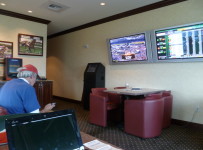